"Fixing sunset as the time that the SpiritStore (ArtCafe) closes seems to encourage the appearance of a late flamed Limerick sun spotlighting this corner of town and participants are now illuminated while engaging in a contemplative wind down viewing the days final event.
Illustrating this on Saturday the performer Mark Carberry presented himself as a sun god in transit. As he stood in the middle of the floor surrounded by nearly 50 people his bronze vinyl leggings and burnished tunic absorbed the summers last rays allmost encouraging him to anoint this temporary space for autumms arrival.
Carberry was working tonight with the composer John Greenwood showcasing two collaborative performance pieces. Here they reconstructed personal fragments and observations distilled from rants, ranting and all sorts of mental exfoliation into a performance workshop using the Spiritstore as a platform. The result is delivered for the space through the combined medium of electro acoustic sound design and body movement.
Lately, memories are being logged and reconstituted in the SpiritStore as both passersby and past patrons drop in to share stories of the Sarsfield Bars past. This week we heard that the space was a hub for (quote) ‘working girls’ in the 1930,s. This information- which if presented in the context of this evening- allows for another addition, one more possible twilight reimaging as the building silently offers past tales to the performer in its center tonight.
Carberry on the floor is now a figure of dull shined twists. We watch and follow his pointing finger. Our attention is drawn to the faded 30s era scraps of paper mummified by the walls plaster. He arches upwards as Greenwood triggers limbering audio shapes from a laptop. The deep green papered roof now appears church high as from the speakers an electronically treated voice talks abstractly of sonourous Sex.
Outlining this theme in movement the duo sought to present –as subject matter- the tension inherrent in the aspects of presentation that occur when you sexually set out your stall. This act is of course not compliant on gender or age and it is a subject as a performer Carberry has creatively visited before.
The words ‘Britney Spears’ is growled from Carberrys mask at one stage as he claws on the carpet towards what appears to be a pair of high heeled shoes deformed by white gaffa tape. (Note. One of the patron saints of music preformance, Kate Bush once laid out a similar agenda in her song ‘Suspended in gaffa’)
An imagined pattern occurs as we absorb the time and place. How much ranting occured when the Women of the 30s occupied this space? What tone did they adopt? How did they position themselves? Did they tailor their words and thoughts around these four walls also? Was their attire as confrontational as Carberrys tonight? (For purposes at the begining, a green table cloth was fashioned and powershouldered as a cape to offset his gaffa taped head.)
Greenwoods score was puncuated with silences filled by the cafes coffee machined hiss alternating with recognisable sampled urban noise treatments. These ocassionally stood apart from the activity on the floor but never so much as to assume a detrimental identidy compromising the piece.
The sound of train on an over head track stuttered from the speakers. Outside cars picked up in volume, their noise washing in as they began to ferry the weekend population into the city. A bronzed Mark turns and stands facing the wall to finish.
Before leaving both preformers explained the nature of their collaboration and how feedback from displays like tonight are integral to the work in progress. The shorter first piece of the two tonight was showcased intially as a finished work on the ‘Rants’ theme but most felt that the improv of the second movement was a stronger interpretation particularly after Greenwoods explanation of how the moodboards the duo used visually shaped the piece.
This work well worth following as a journey shaped through improv and focused through different Limerick spaces. Its particular sucess tonight in some small part due to the Spiritstore and the emotional static that circles its walls when the sun goes down." 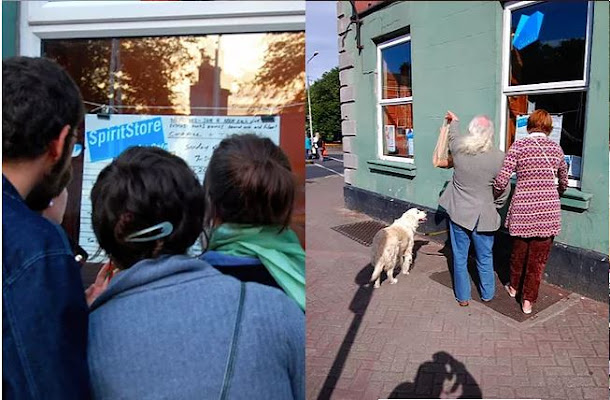 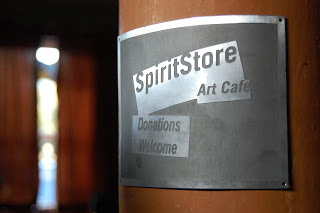 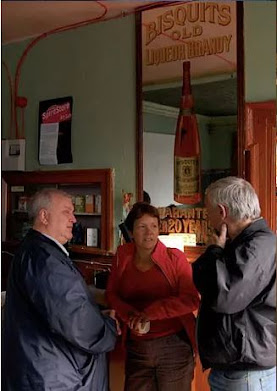 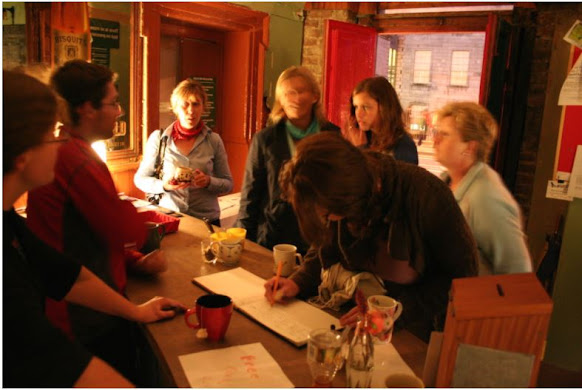 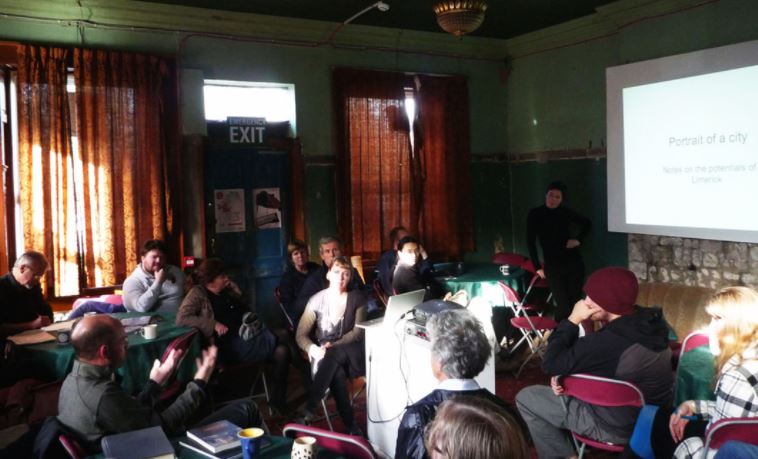 Post Celtic Tiger crash Limerick, plans for a large city centre commercial development have stalled.  The corner plot of this development is Limerick's oldest Georgian building, originally built as the Limerick Lord Majors residence, known to all as the Sarsfield Bar.  The building is an understated historical pivot, it has weathered tastes, trends, forgotten plans, aspirations and the ambitions of a city.  It remains standing at one of the city's entry points.  The space has been left to idle, in a liminal state. Liminality is a dynamic concept often associated with struggle, hybridity, anarchy and creation. Art making in threshold places, where people and places exist in in-between states is full of potential for everyone involved.

The SpiritStore Art Cafe project was initiated in The Sarsfield Bar in 2009. Over the course of a year, this infamous Bar was reopened and instated as the SpiritStore Art Café. This particular bar had been closed to the public for five years; it held, in recent history, almost mythical status in the collective Limerick imagination. This was due entirely to the reputation of the bars original owner, Sean Hickey. SpiritStore opened the first Georgian building, an icon of the cities modernity, as a social space open daily as a café serving free tea and coffee with a weekly programme of workshops, readings, performances, exhibitions, talks and installations.